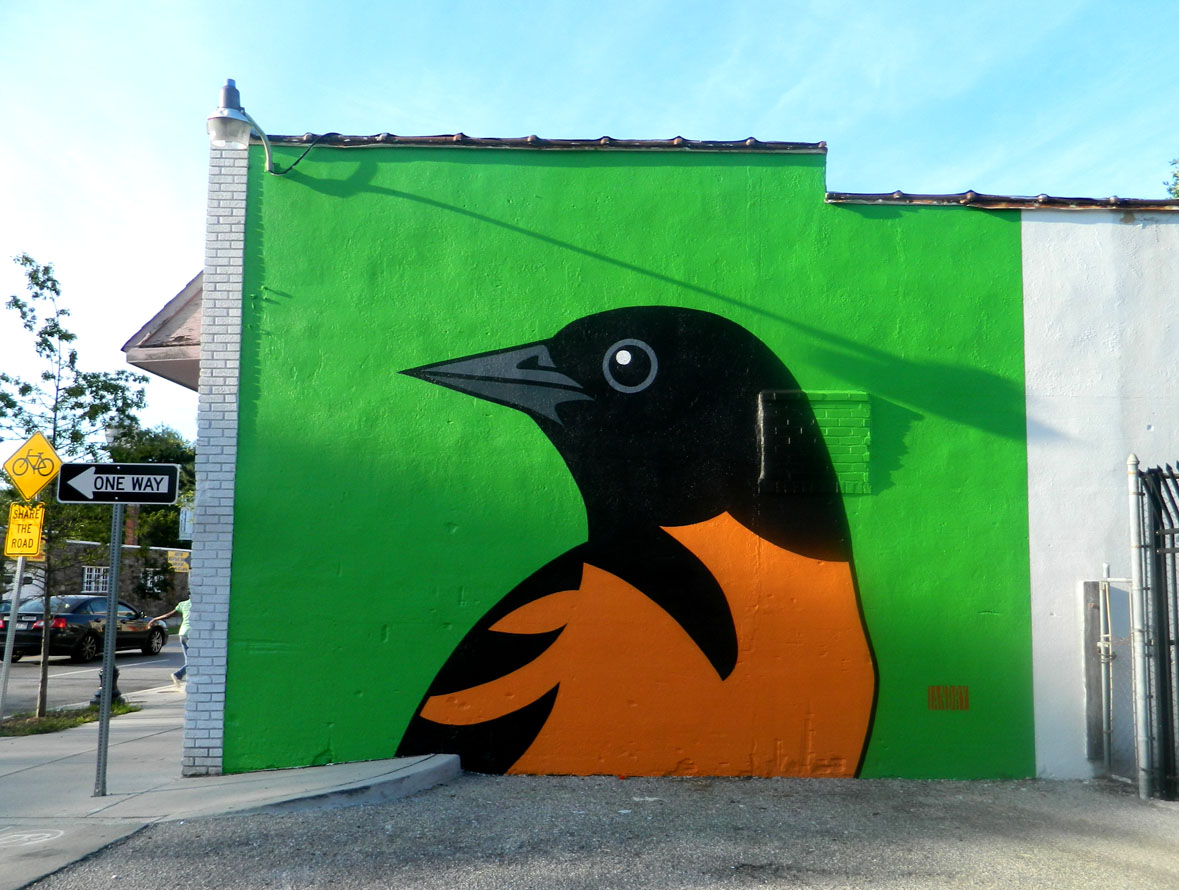 Baltimore Oriole, Maryland’s state bird and Baltimore’s favorite bird, is a beautiful golden orange bird with a shiny black head and black-and-white wings. The species’ rich, flute-like song is often heard throughout Baltimore, especially along forest edges, river banks, and open woods, like parks. Orioles eat insects and fruits. If you would like to attract this species to your home, place orange halves near your feeder or put out some grape jelly in an open dish. Baltimore oriole nest are an architectural beauty. The female weaves a sock-like nest, suspended across tree limbs with grass, horsehair, and artificial fibers. She takes 7 – 15 days to build the nest and will then lay 3 – 7 pale gray eggs that will hatch in two weeks’ time. 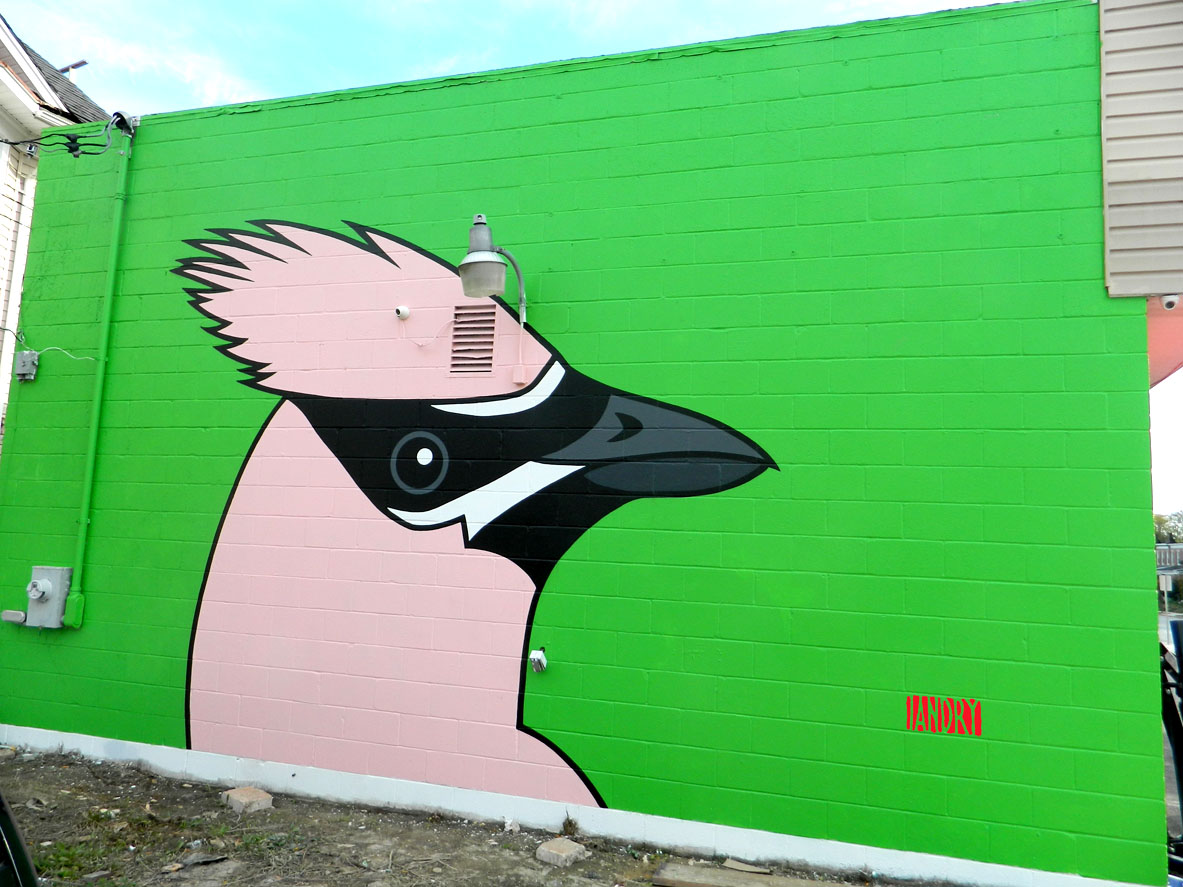 Cedar Waxwings are bold colored birds with rusty brown bodies, black face masks, and orange or yellow wax-tipped tails. They are often found in flocks, filling themselves with berries from a variety of plants, such as mulberry trees and honeysuckle shrubs. They are common in residential areas, staying in Maryland all year round. 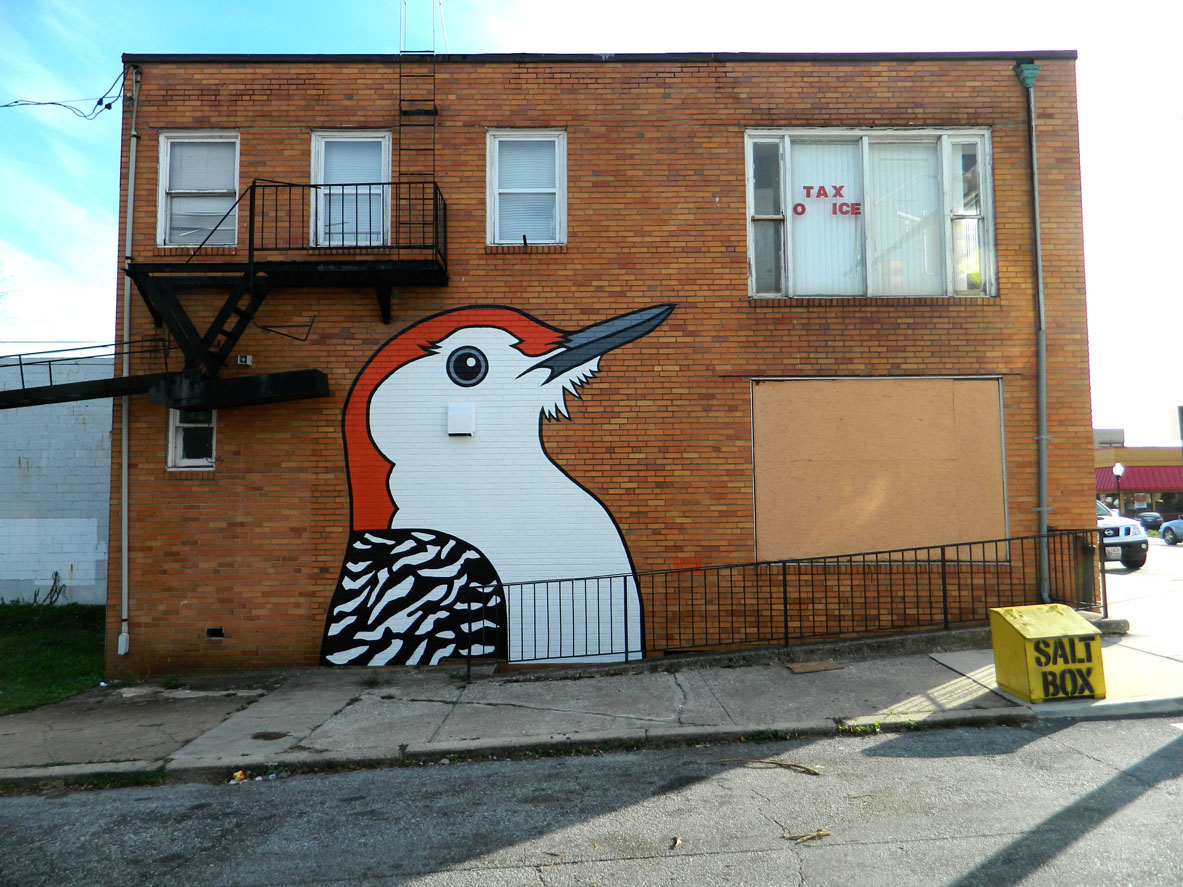 Red-bellied Woodpeckers are common woodpeckers found in wooded areas that have a red cap, black wings, and a warm beige belly.  Their large black bill is used for drilling into dead wood to pull out insects and larvae with their barbed tongues. They also drill cavities inside dead trees to lay 2-6 eggs and raise their young over a month-long period. 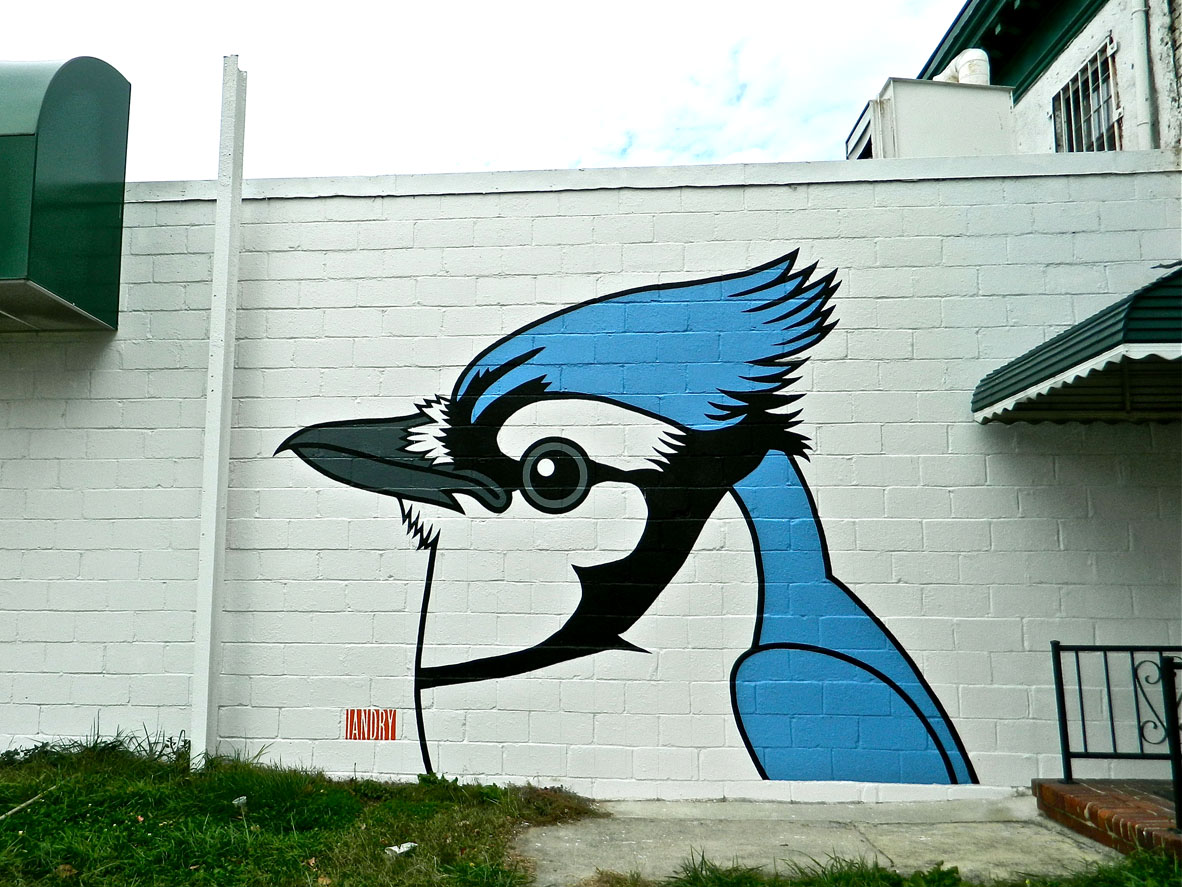 Blue Jays are the local noisy neighbors in wooded residential areas, with their loud jaaaaay calls that easily distinguish them. They are pale to bright blue and white birds that eat a variety of insects, nuts, and seeds. They also sometimes eat eggs from other birds’ nests and are aggressive at the local bird feeder. Blue Jay eggs are blue to light brown, within nests placed approximately 20 feet above ground in trees. 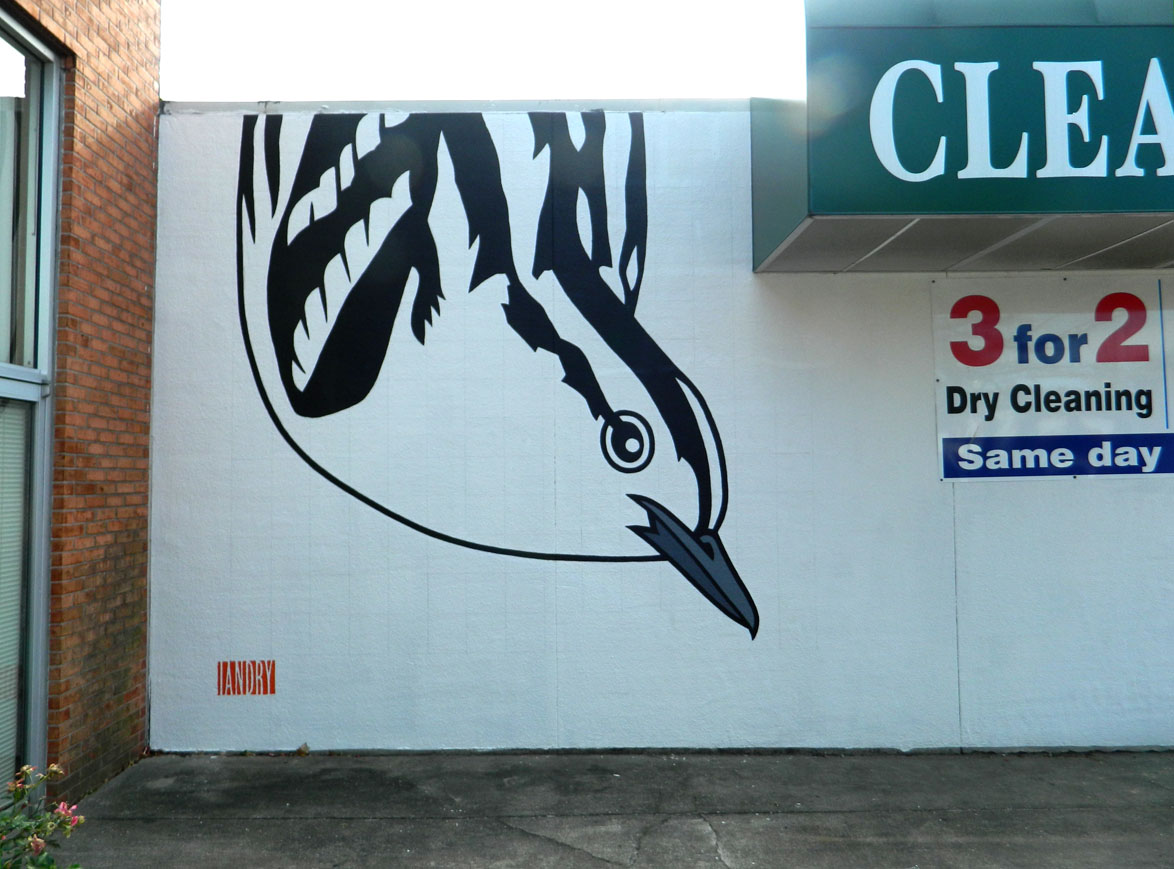 Black-and-white Warblers are small, black and white striped birds that live in forests. Often seen creeping along tree branches, they eat a variety of insect larvae hidden in the wood, along with ants and beetles. They spend the winter months in Mexico and migrate up to Maryland to breed in the summer, by building well-hidden nests on the ground near tree trunks. 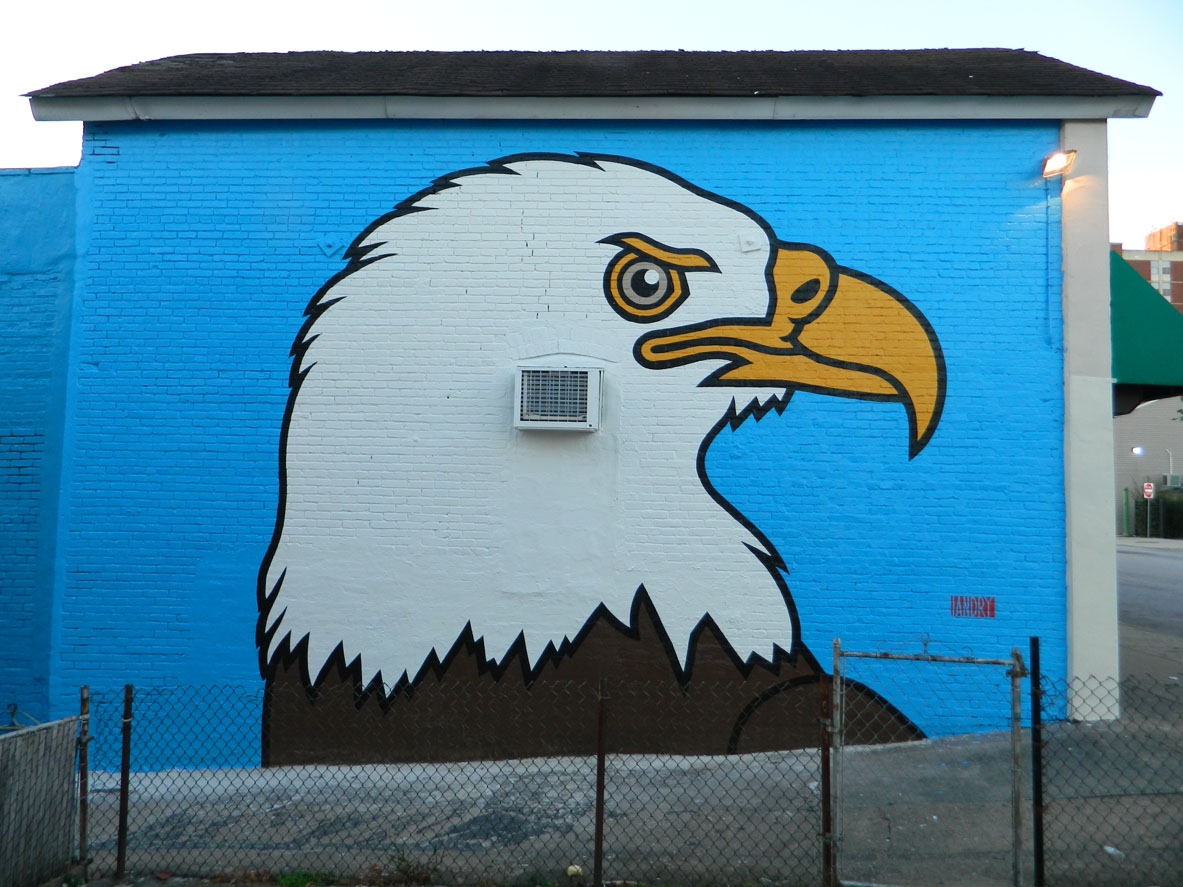 Bald Eagle is a striking sight and has been America’s symbol of freedom since 1782. These large brown birds with their characteristically white head and large yellow beak are now once again found across North America after being taken off the list of threatened and endangered species in 2007. If you keep your eyes open for them, you might spot one along Baltimore’s rivers and streams especially during the spring months when they build their massive nests, ranging in size from 5 – 6 feet in diameter and 2 – 4 feet tall! This species is piscivorous, or a fish-eater, and likes to eat what is available to them, even if it is other birds, reptiles, and even crabs. 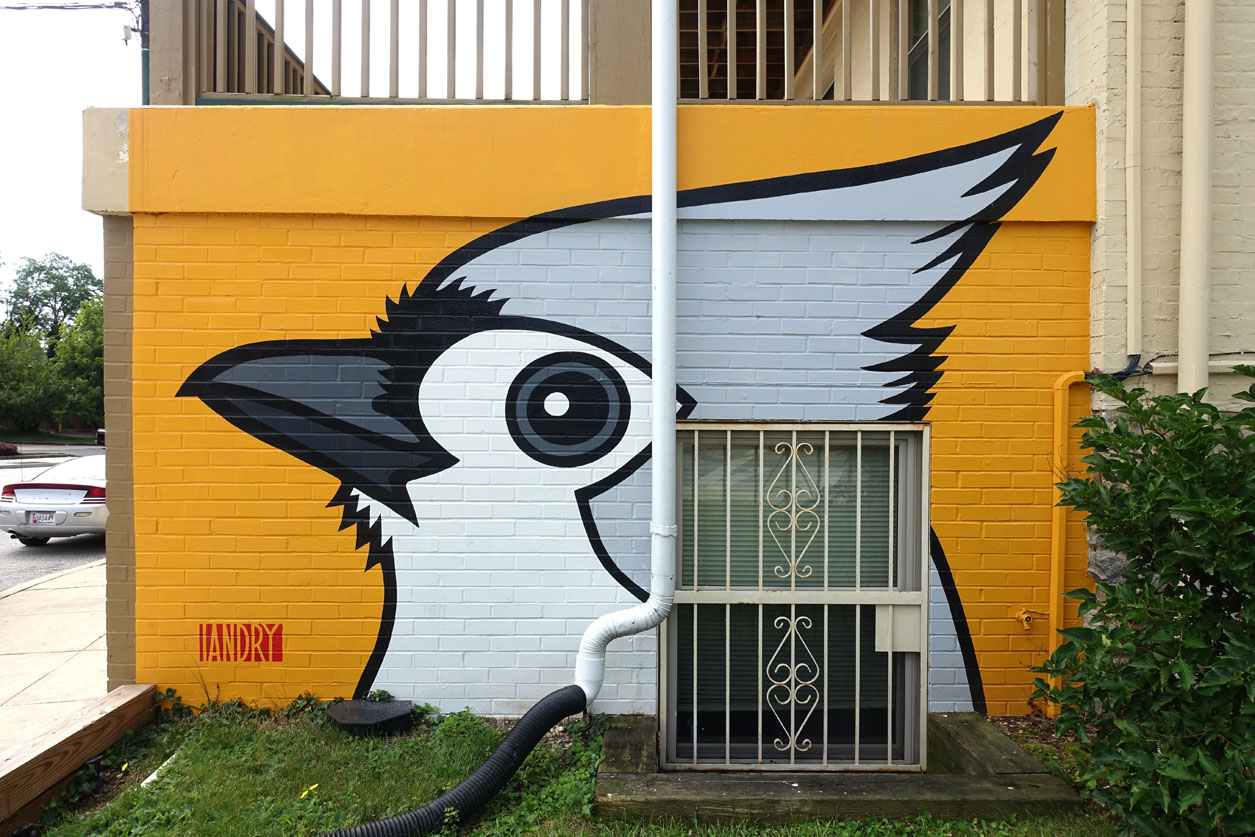 Tufted Titmouse is a small gray bird with large, dark eyes and a mohawk-like crest that you often hear before you see. This little bird loudly exclaims “Peter! Peter! Peter!” in the breeding season. Closely related to the chickadee, this species prefers to eat seeds, especially from bird feeders, and will also eat berries, caterpillars, and spiders. Tufted titmice nest in cavities carved out of a tree, but they rely on woodpeckers to do all the carving work! They line their nests with moss, grass, and hair, sometimes plucked directly from mammals, and tend to have 3-9 young in each summer nesting season. 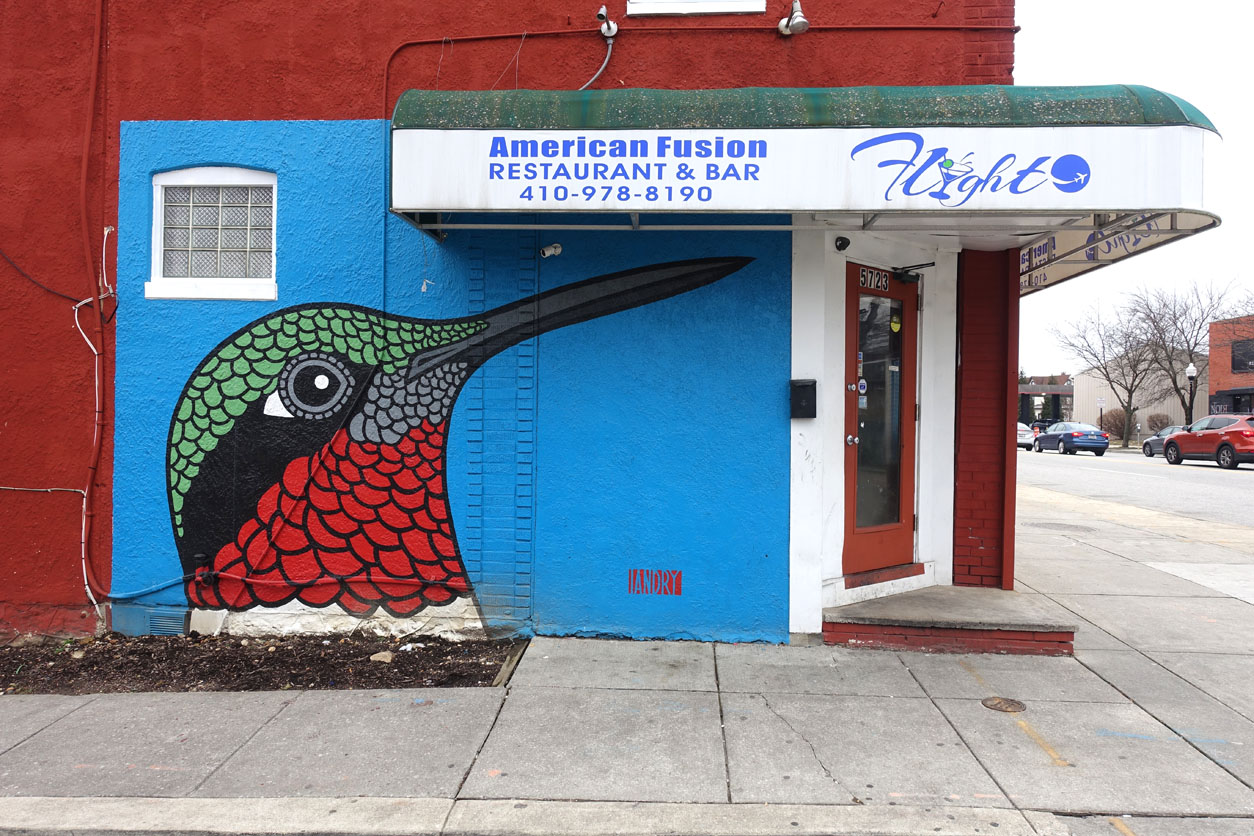 Ruby-throated Hummingbird is a beautiful bird that you wouldn’t forget if it visits your feeder. Weighing in at only 2 – 6 grams (approx. 0.1 oz), this tiny bird is metallic green with a gray, white belly. Males have an iridescent ruby red throat patch, while females lack this bejeweled feature. Their nests are the size of a large thimble, yet hold 1-3 tiny eggs! Even though ruby-throated hummingbirds breed in Baltimore, they travel to Mexico and Central America for the winter seasons. Before leaving for their migration, they gorge themselves on flower nectar and will visit hummingbird feeders filled with sugar water. 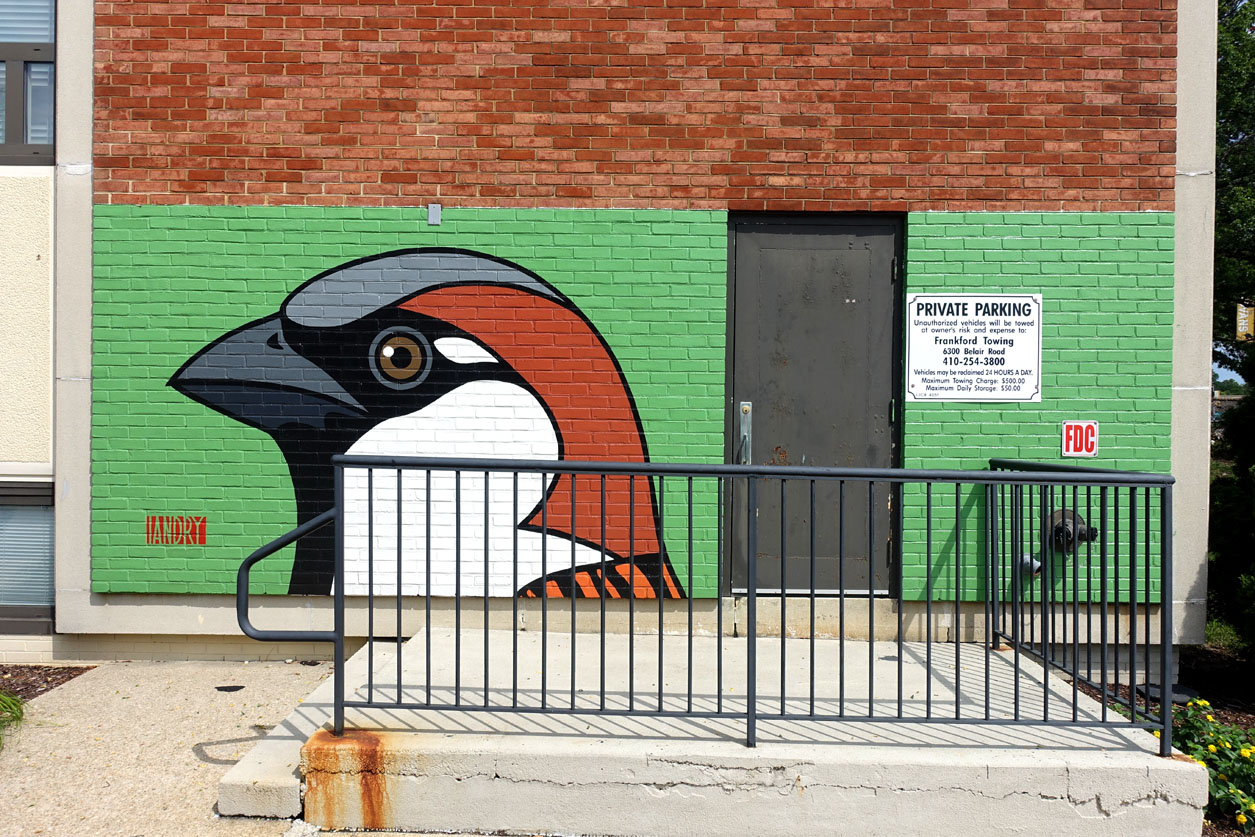 House Sparrow is one of the most common bird species found in Baltimore, especially in the more built up locations. These small brown, gray, white, and black birds are usually found hopping and chirping along street corners and parking lots. Males have a dark splotch of black on their chests and rusty feathers on its head and back, while females are a dull brown and gray. This species was not always in Baltimore. House sparrows were introduced to Brooklyn, New York back in 1851 and have since found their way across North America from England. They prefer to live in cities, and often build their nests in buildings or overhanging fixtures, like streetlights and street signs. 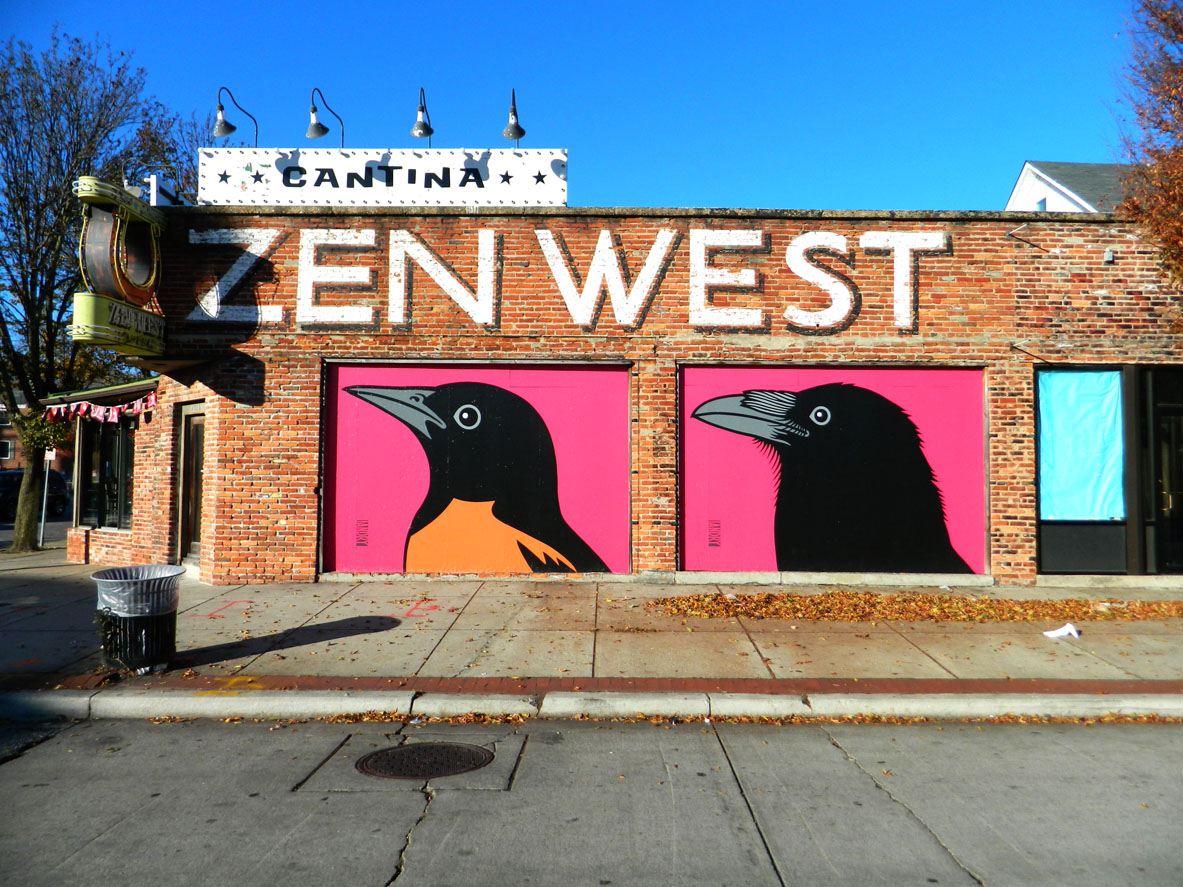 Baltimore Oriole, Maryland’s state bird and Baltimore’s favorite bird, is a beautiful golden orange bird with a shiny black head and black-and-white wings. The species’ rich, flute-like song is often heard throughout Baltimore, especially along forest edges, river banks, and open woods, like parks. Orioles eat insects and fruits. If you would like to attract this species to your home, place orange halves near your feeder or put out some grape jelly in an open dish. Baltimore oriole nest are an architectural beauty. The female weaves a sock-like nest, suspended across tree limbs with grass, horsehair, and artificial fibers. She takes 7 – 15 days to build the nest and will then lay 3 – 7 pale gray eggs that will hatch in two weeks’ time.

Ravens are massive black birds that look similar to crows, but with larger beaks, longer wings, and a thick, shaggy throat. This species prefers cooler open forested habitats in Canada and along the Western United States. Baltimore is only at the southern edge of this species’ range, but some ravens are seen in the city throughout the year. Ravens will eat almost anything they can get, from small mammals, eggs, scorpions, berries, and carrion. One of the smartest bird species, they have been known to use tools, like sticks, to get food out of tricky locations. They tend to nest in trees, on cliffs, and on human structures, like powerline towers and telephone poles. 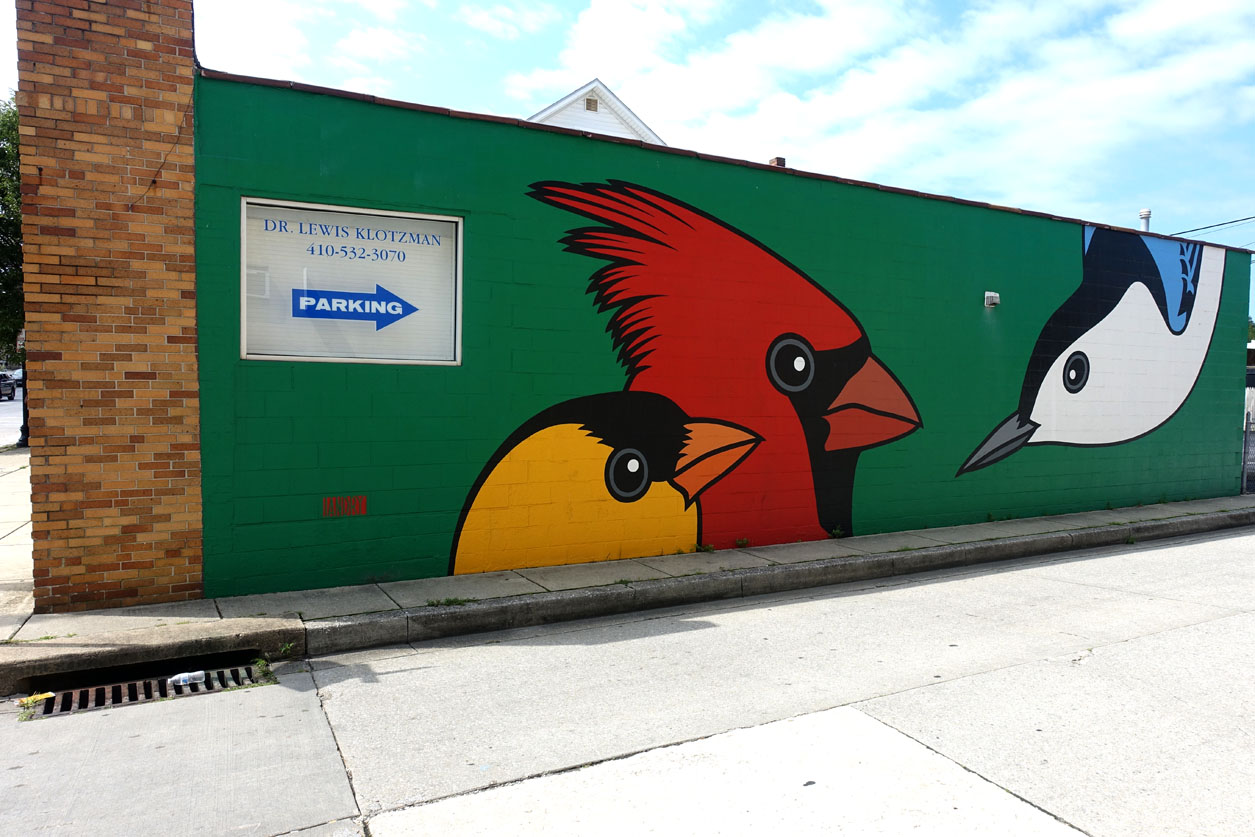 American Goldfinch is often a bright addition to the birds that you may find at your birdfeeder. This small golden-yellow and black bird is common throughout Baltimore, often seen flying in a wave-like pattern and calling “Po-Ta-To-Chip!” Goldfinches prefer open grassy areas to reach for their food of choice, which is not potato chips, but instead seeds. They love sunflower and thistle seeds, which are often sold for feeders to attract this species. Goldfinches use roots and plant fibers to build their nest, often using spider silk to bind the nest to the supporting shrub branch. They lay 2 – 7 pale blue eggs which will hatch in about two weeks. Once grown, the nestlings will leave with the parents for the southern United States and Mexico for their fall migration.

Northern Cardinal is a bold splash of color within any backyard habitat. Known for their bright red color, large mohawk-like crest, and sharp bill, only males of the species are red overall. Females are a dull brown color with hints of red feathers and a bright pinkish-red bill. They use their large bill to crack open seeds, but they also eat fruit and insects. Both males and females of this species loudly sing “Cheer, cheer, cheer” or “Birdie, birdie, birdie” mainly in the spring and summer months. This species builds a nest out of twigs, leaves, and grass in trees and shrubs. They tend to lay 2-4 white and brown spotted eggs per nest, and can make up to 2 nests in one summer.

White-breasted Nuthatch is a common bird found at bird feeders, especially in habitats with many trees. If you can’t see them at the bird feeder, chances are you will find them hopping down and around a tree, sticking their head outwards to look around. Nuthatches are often found around trees because they prefer to eat insect larvae found on or under the tree’s bark. They also nest in tree cavities, laying up to 9 eggs per season. This little bird has gray-blue feathers on its back, with a white face, black cap, and chestnut feathers below. Nuthatches loudly sing a rapid “Wha-wha-wha” song that sounds like a nasally laugh.