The B’more Birds project began with a 1 percent for Public Art Project, a collaboration between the Department of Transportation and the Baltimore Office of Promotion and the Arts. Artist Iandry Randriamandroso was selected for the project due to his innate understanding of the importance of the interconnection between environment and residents. He explains: “In ever changing urban landscapes, (the birds) represent adaptation, resilience, and the continuation of life. When changes occur in a neighborhood, it changes the dynamic make-up of the population - new inhabitants come; some leave; some stay and adapt with the new changes. Eventually, they represent us and our neighbors.” The first 5 B’more Bird murals came to life on the York Road Corridor between 42nd Street and Woodbourne Avenue in 2014. The local birds included in the first 5 murals are: Baltimore Oriole, Cedar Waxwing, Red-bellied Woodpecker, Blue Jay and Black-&-White Warbler.

LINKS (B'more Birds in the News) 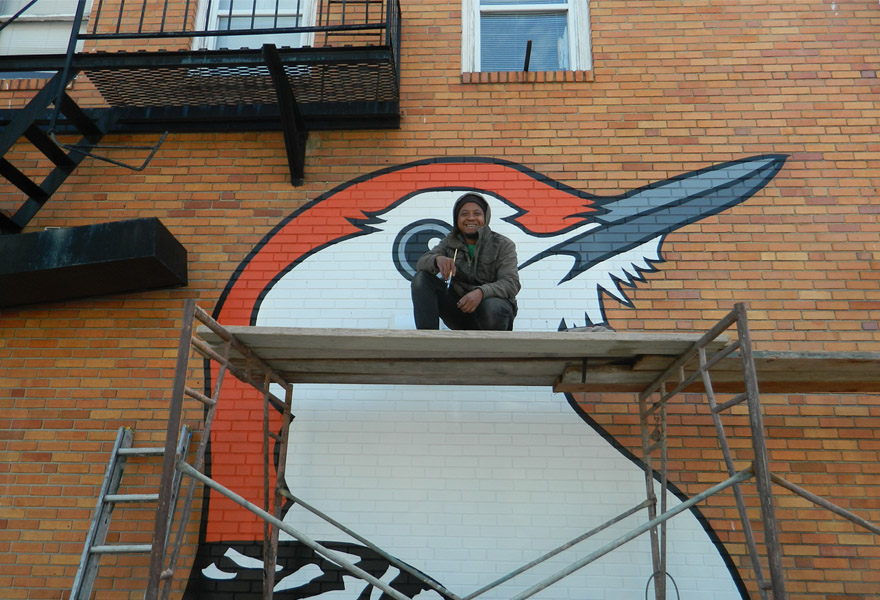 Iandry Randriamandroso is a Muralist, Graphic and Community Artist. He specializes in graphic and mixed media art-making that focuses on environmental and social subjects. He received a BFA from St. John's University (Queens, NY) and an MA in Community Arts from the Maryland Institute College of Art (Baltimore, MD).

His goal is to create art that is inclusive and accessible to everyone. He uses his artworks as educational tools to facilitate inclusive and hands-on presentations, community arts workshops, art classes and mural projects in public and private venues around the US.

Christine Brodsky is an Assistant Professor of Biology at Pittsburg State University in Pittsburg, Kansas. Her research focuses on bird communities in urban greenspaces to determine which plants, landscaping practices, and structure best support native bird species. Her focal research project evaluates the value, management practices, and perception of vacant land in Baltimore, Maryland. Originally from New Jersey, Christine went to college at the University of Massachusetts and obtained her PhD in wildlife ecology at the University of Missouri. She now lives in Missouri with her husband and two cats.